１６２５
By order of Matsukura Bungonokami Shigemasa and the Tokugawa Shogunate, Christians were to be strictly oppressed. (It has been said that during this year, 10 Christians were thrown into the hot springs fire pit)

１６２７
Christian oppression becomes even more severe. From this year until 1630, Christians were taken to the hot springs and tortured until they converted, called "Yama iri".

１６６３
March, the south side of Mt. Fugendake erupts (Eruption of 1663)

１６９３
To protect the hot springs, a mountain keeper is placed, and on April 1st, signs are put up at the 4 entrances to the grounds

１７３１
Bath is constructed at Kojigoku hot spring. Named the South Hot Spring, with the Furuyu dug in 1653 named the North Hot Spring.

１９２８
Mt. Unzen is designated by the Historical Spot, Scenic Beauty and Natural Monument Preservation Law at the time as a place of scenic beauty.

Current from the post-war

１９４９
His Majesty the Emperor visits

１９５２
Mt. Unzen and Mt. Fuji designated by the Cultural Protection Act as a "Special Place of Scenic Beauty"

１９９１
Number of guests dramatically decrease as a result of eruptions

７０１
In the Nara period, renowned monk Gyoki constructs Daijyoin Manmyoji temple. The temple name was Unzensan. Although written as "Onsen", it was pronounced "Unzen". Additionally, Unzen also was home to Shimengu shrine. (Refer to Unzen's Buddhist legend and relics)

１１１５
Monk Teiso rebuilds Daijyoin Manmyoji temple. It has been said that there were 300 monks in Seto Ishiwara, and 700 monks in Bessho, a total of 1000 monks.

１９９１
Fugen shrine burned down due to eruption.

2）Why was Unzen called Takakumine?

6）Rise and fall of Shingon Buddhism

１５７６
Arima Tadanao's wife and child, along with 30 senior statesmen are baptized at Kuchinotsu
Christians in Shimabara Peninsula reach 20,000. Arima Yoshisada passes away. After the death of Arima Yoshisada, his second born child Harunobu becomes the 13th lord of Arima.

１５８８
Hideyoshi confiscate Mogi, Nagasaki, and Uraga no Ike from the Society of Jesus. Arima receives seminario, moves to Hachirao. Noviciado, moved from Nagasaki to Arie, then Amakusa

１５８９
Seminario in Hachirao moved to Kazusa along with printing press

１５９７
Seminario moved from Arie to Nagasaki (26 martyrs of Japan, martyred at Nishisaka)

１６１０
Harunobu destroys the Nadle and Zeus outside of Nagasaki port

１６１３
Diogo Hayashida and 7 others martyred at Arima 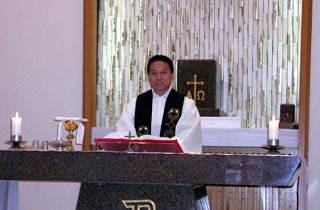 Between 1612 and 1658, at the Shimabara Peninsula, over tens of thousands of Christians had martyred themselves. Martyrs, are those who willingly gave their lives for God and people. They are people who did not lose their goodness or generosity, amidst a turbulent society and a life of poverty. The lives of those people will not be forgotten.
As the times were about to change, the world was on edge, and both adults and children were crying out. It was being shaken from the core.
"In our century, the martyrs have returned. Many of them remain nameless warriors, and have given their lives in honor of God. Now is the time we must treasure their testaments."
(Pope John Paul II "As the Third Millennium Approaches")
We hope that those who visit Unzen and Shimabara find something concrete, and can begin on their path to true happiness. 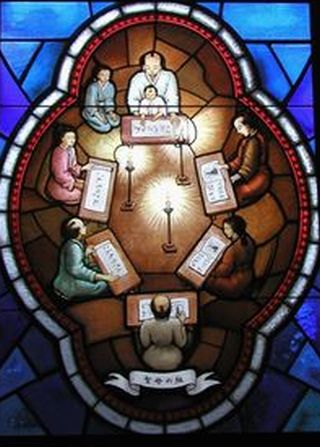 The "Holy Mother Congregation Association" was an organization formed in Europe, still shaken from the Reformation, to train leaders of believers. In Japan, it is known as the "Santa Maria Association", and took shape of small community development through the education of believers. "Doctrina Christão (Teaching of Christians)" was the Church of Japan's first catechism, and was instrumental for the church to spread Christianity in absence of a priest. Furthermore, the "Konchirisan (Prayer for Absolute Contrition)" was recited, and was always recited during martyrdom and fumi-e. This collection of belief education and prayer were continued on during the persecution era in secrecy, and it is believed to be the reason for solidifying the faith of believers. "For where two or three are gathered together in my name, there am I in the midst of them." (Matthew 18:20) Believers will gather to learn and pray together, and the three candles that light their efforts signify that their efforts will take place under the Holy Trinity. In a time of darkness, God has shined a light upon those who were oppressed. The faces of those who saw God shine bright. 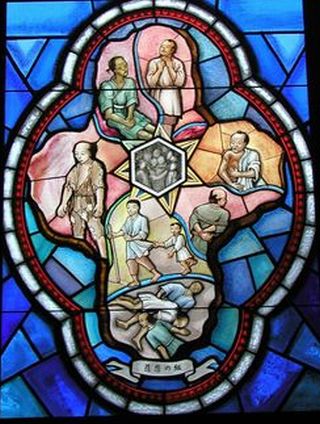 Christian gospels, spread by Francis Xavier, were passed down to poor Japanese people through Almeida, who was a missionary and doctor, as "God's mercy" through healing. Almeida formed and taught groups to practically carry out the words of the gospels, which laid the foundation for what would later become the "Misericórdia (Holy House of Mercy)". Their efforts, such as medicine, welfare activities, and helping the poor would reflect the "righteous men" in Matthew 25. In the "Doctrina Christão", there is a section on the Holy House of Mercy's "14 encouragements". On the stained glass, there are images depicting "7 encouragements regarding things and the body" (those who are hungry, those who are thirsty, those who have nothing to wear, those who are sick, those who are traveling, those who are captured, those who have passed away). "Be merciful, just as your father is merciful." (Luke 6:36). Through these teachings, Christian gospels were spread to poor Japanese people without reason, not because of righteousness, but through mercy. 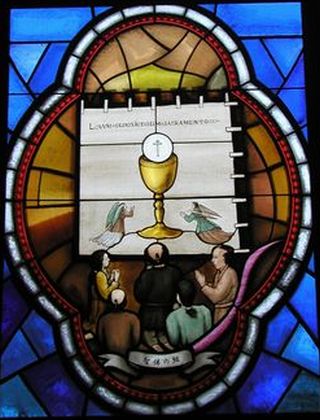 It is unclear how or who started it, but the activities of believers calling themselves the "Communion Association" appeared in the annual report from around 1610. Particularly, when the persecutions began, by preparing Eucharist worship and communion, they would encourage fellow believers and supported them. At the Shimabara Peninsula, it is reported that the martyrs were told to pray "praise the Eucharist". Furthermore, from the battle of Shimabara, there have been discoveries of flags of the Communion Association (battle flags of the Battle of Shimabara) and skulls of people whose heads were cut off with medallions in their mouths, showing proof of believers related to the Eucharist. It was Bishop Ignatius who preached the strong connection between the Eucharist and martyrdom, who later martyred himself in Rome, and it is thought that Japanese believers had the same spirituality. The reasons why Christians lived and died the way they did is the Eucharist. "The Misa is the source and the pinnacle of Christians." ("Dogmatic Constitution on the Church") On the stained glass, representing the flag of the Communion Association, there is a depiction of believers and angels in prayer in front of Ostia and Charis. It represents people receiving bread from God, as well as the decision of the people to become like Christ because of his sacrifice. 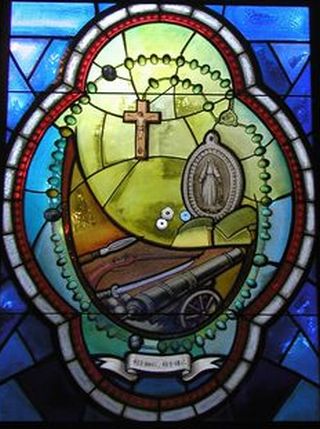 【The Sword to A Spade, The Spear to A Sickle】

The above three movements by the church represents the three missions (prophet, king, priest) of Jesus the Messiah (Christ, The Anointed One). In any era, these are the basics of the church, and by maintaining a balance of teaching, caring, and praying, the church reaches the same height as Christ. In the age of martyrdom, the churches in Japan remain as a symbol of their growth. The rosario beads, medallions, and crosses still being discovered today at Hara castle ruins, the bloody battleground for the battle of Shimabara, are believed to be made by Christians who held up indoors out of cannonballs and bullets.
They have transformed tools of war to tools of prayer, tools of killing to tools of peace. "And they shall beat their swords into plowshares, and their spears into pruning hooks" (Isaiah 2:4) Prophecies from God are truth. However, before reshaping cannonballs into rosario beads, there was a being who changed Christians from Adam's children to God's children. The rosarios are an "intermediate" form of prayer to that being. "His mother said to the servants, "Do whatever he tells you." (John 2:5) The role of the Holy Mother is to be an intermediate for the one who changed water into wine. Christ through Mary, presented change as "passover". The lead rosario beads are a symbol of "passover" left by the church in the age of martyrdom. 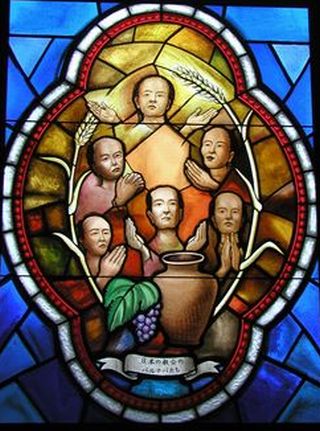 Rarely are there churches that have been raised by the believers such as the churches in Japan. Especially how the church remained intact without a priest for 250 years is definitely thanks to the work of something supernatural, but it was also proof that a church can survive only with its followers. However, the existence of specially chosen followers cannot be ignored. "Go into the city, and a man carrying a jar of water will meet you. Follow him." (Mark 14:13) "Joseph, a Levite from Cyprus, whom the apostles called Barnabas ("son of encouragement"), sold a field he owned and brought the money and put it at the apostles' feet." (Acts 4:36-37) From the days of the believers, as an act to protect them God chose a "son of encouragement". Those believers, who hid the missionaries, lead the believers, and protected the church with their own bodies, is definitely a loving child of God. From days of yonder to now, the Barnabas have supported the churches in Japan. Their lives are the grains of the bread of Christ, and their blood are like the grapes. The stained glass represents the Barnabas of the churches in Japan, and depicts the faces and praying hands 6 martyrs of Unzen, now applying for beatification. 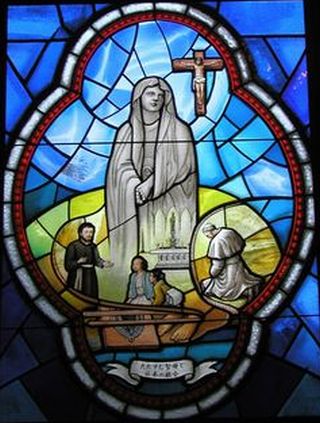 【Standing Virgin and Churches of Japan】

"And to the disciple, 'Here is your mother.'" (John 19:27) The crucified Christ gave upon us Mary as the mother of the church and the mother of those in suffering. Ever since, the Virgin Mary has been standing by those who are in suffering (Stabat Mater: Stationary Virgin, Sorrowing Virgin). During a silence of 250 years, Japan's churches did not have a single priest, yet the Virgin standing beside the cross silently was in sorrow. Not only was she beside the church, but also by the poor believers who would be faced with fumi-e year after year, chanting "Konchirisan" to repent their sins. In 1854, when the article of faith was announced for the Immaculate Conception, in 1858 the Virgin Mary appeared in Lourdes as if to confirm that. Through the missionaries of the Paris Missionary Association, who were affected by this Mary worshipping, God opened Japan's churches closed doors. The symbol (slogan) was "where is Santa Maria". Fr. Petitjean and Sugimoto Yuri, who represented the hiding Christians, reconfirmed their faith through the Virgin Mary. The Virgin Mary has been with the churches of Japan since Xavier's time. Furthermore, on August 9th, 1945, the US dropped an atomic bomb over Nagasaki, which exploded above the Urakami Cathedral. When this happened, the hands of the statue of the Virgin Mary standing by the cross were blown off. Even then, the Virgin Mary silently stood by those who were in suffering. "In 7 generations, the Pope will come from Rome". This prophecy, told among the hiding Christians, came true through Fr. Petitjean. On February 26th, 1981, Pope John Paul II came to this land, and prayed for the churches of Japan in front of the Virgin Mary. 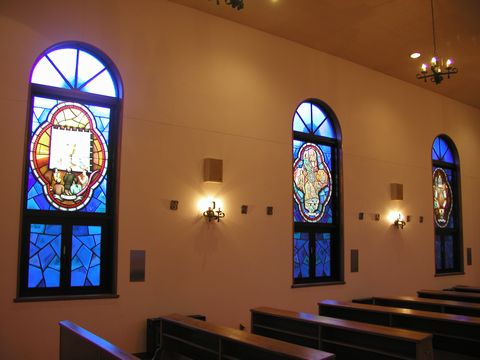 Every week on Sundays, from 11 AM, a mass takes place.
Please feel free to join.
Every day, from 9AM to 5PM, the stained glass is available for viewing.